Vincent Sebastian is a percussionist/ vocalist. He plays in the electronic club scene with Tribalismo and on the live scene with Watussi as well as being a freelance session musician. He is known for his energetic playing and his use of English/Spanish vocals. He has played with artists such as Ron Carroll, Rob Vission, Sandy Rivera, Richard Earnshaw and alongside Santana, Los Van Van, Sean Kutu. He has toured extensively, playing internationally in countries such as Japan, Korea, Brazil, Colombia, Chile, Peru, Amsterdam, Malaysia. At such festivals as Rainforest Festival (Malaysia), Bogota Festival De Teatro (Colombia), Ulsan Festival (Korea), and Osaka Kokolo Festival (Japan). He studied percussion in Havana, Cuba and Bogota, Colombia and has appeared on collaborative tracks with All Good Funk Alliance (DC, USA), Rephrase, and Omegaman. Contact his management This email address is being protected from spambots. You need JavaScript enabled to view it. 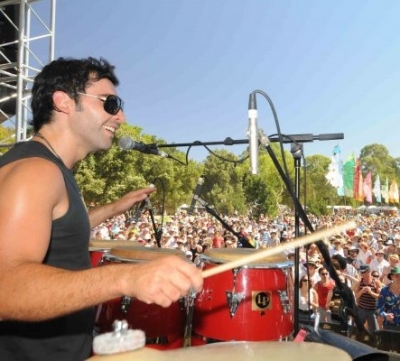