Like most kids of the 80’s Josie Styles began her DJ’ing career by making ‘pause-button mixtapes’ for her friends with her father’s extensive record collection. By the early 90s Josie’s addiction to collecting vinyl and her determination to master the art of turntablism had well and truly kicked in. Sydney’s iconic Next Level Records recognised Josie’s talent and her dedication to hip hop music, and she became their only female employee, thus catapulting her straight into the heart of the burgeoning Australian hip hop scene.

Josie used her time working at Next Level as a platform to raise awareness of creative and talented female hip hop artists in a male-dominated industry. She established a solid network of artists and friends locally, interstate and on an international level. Josie took to the airwaves on community radio on 2RES and 2SER and then nationally on Triple J’s inaugural ‘Hip Hop Show’. In 2003, Josie released the first Australian Hip Hop compilation to be distributed by a major label (‘Straight from the Art Vols 1 & 2’ Warner Music 2003-2004).

Josie has earned a reputation in Australia and overseas as a boss DJ with a knack for tailoring her tune selection to each event and keeping the dancefloors full. Known as Sydney’s “Bashment Queen” and thanks to her vast record collection, Josie can easily switch between genres covering deep funk, dancehall, club hip hop/R’n’B, reggae, soul, nu-soul, nu-jazz, electronica, pop and everything in between.

During its entirety, Josie was one of the resident DJ’s at Sydney’s successful weekly hip hop club night ‘Boogie Down’ at Candy’s Apartment. She has supported international hip hop artists including Jurassic 5, Peaches, Ugly Duckling, Kool Keith, Jean Grae, and The Beatnuts as well as almost every Australian hip hop artist.

Josie has been stage DJ for many performing artists including Lotek (UK), Eternia (Canada/NYC), Layla, A-Love, Drapht, Muph N Plutonic, and KillaQueenz rocking to over crowds of 10 000 people and more!

Josie’s love of collecting rare vinyl has taken her across the world to DJ at New York’s infamous 45’s night ‘Mobile Mondays’ and at Portland’s ‘First Friday Super Jam’ at least once a year.

Her current residencies include Sydney’s 45 Sessions, PlayBar, Goro’s and almost every Pole Dancing event in Sydney. 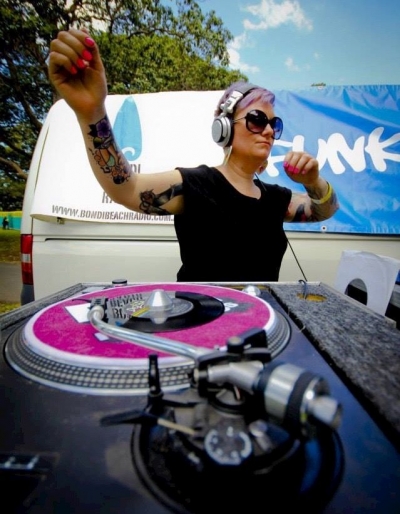