Searching for inspiration to write a deejays biography I -finally- watched High Fidelity, the movie starring John Cusack as a vinyl junky. Cusack -thirtyish, intelligent, hot in a non Brad Pitt of way- owns a record shop and basically has a too great passion for music. TOO great because his addiction to vinyl doesn't only results in an amazing record collection and hot chicks flashing their shirts in front of the turntabels, but more so in a neglected apartment, disappointed parents and a girlfriend who's leaving him. It took me only a minute to realize Maestro must have felt a painful amount of recognition watching this flick. Because he is not only the greatest music lover I have ever met, he also payed his prices.

Cusack, like Maestro, clearly knows the meaning of great sounds. But where Cusack has taste; Maestro has TASTES. For you will never hear a deejay spin that embraces such an enormous variety of styles: one quick look into his massive music collection and you'll find a John Coltrane record next to a Cerrone one; a Nina Simone next to a Fela Kuti. Or even better: a Masters at Work next to a Chet Baker. Hear him spin and you'll understand why some people call Maestro a musical roller coaster.

An explanation for this could be his broad musical background: raised in a musically family, Maestro started playing the violin at an early age. After succesfully having worked with different orchestras during his youth, his parents encouraged him to keep playing. But while studying musical science at the University of Utrecht, Maestro developed new passions: jazz and radio. It made him trade his violin for a job at national Jazz Radio

Meanwhile he discovered the party scene and fell in love once again; in love with the beats, in love with the life style, in love with the late nights and early mornings. Through never ending support of one of Holland's biggest deejays, Eddy de Clercq, Maestro soon stood in front of major crowds in Amsterdam based clubs such as Roxy, Escape and Paradise.

I can't help but sometimes wonder if he isn't just a little too much in love with his music. It's what he wakes up for, what makes him breathe, what sometimes even pisses him off. It's what turns his life upside down more then every once in a while. Because if John Cusack in High Fidelity is a vinyl junky, Maestro should have died of an overdose by now.

His love for classical, jazz and club music results in this crazy yet amazing musical phenomenon: deejay Maestro.

10 years later, Maestro released 9 platina rewarded albums for Blue Note records, remixed Nina Simone’s debut album Little Girl Blue, produced 2 albums for Verve/Universal, played all 5 continents, got his house in order and became a father. The only thing that didn’t change is his love for JAZZ. 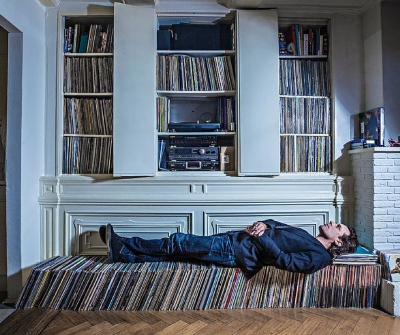