Presented by Funkdafied and Red Karpet Music. Oxford Arts Factory transformed itself into one hell of a soul night thanks to internationally acclaimed, multi-instrumentalist, award winning UK artist OMAR.

There’s always a level of high expectation when an international artist of Omar’s caliber graces your hometown. The expectations where in part influenced by his long withstanding career as a pioneer of the 90’s Neo Soul movement, and all that he has accomplished with collaborative works alongside artists Stevie Wonder, Angie Stone, Common, and Erykah Badu; and part influenced by his music production.

Omar exceeded expectations not only as a flawless performer who kept his high level energy on stage, but his strong sense of musicianship, and crowd interaction will be remembered as one of the best nights Funkdafied was proud to be a part of.

Support Act Inner West musician Milan Ring took to the stage accompanied by her band with grace and impressive prowess on the guitar, performing to full crowd of admirers. You’ll be hearing more from Milan Ring in the next few months, so watch this space… The man of the hour finally stepped on stage to a full room of long time devotees of his music, hanging on every word and action as he delivered a magnificent performance from beginning to end. His vocal ability was impeccable, dynamic and flawless. Every so often, we’d catch a fleeting glimpse of his cheeky, playful personality.

The highlight of the night was a special duo performance with one of Sydney’s talented soul and jazz artist, Billie McCarthy, singing the world wide classic Omar and Erykah Badu version of “Be Thankful”. Watch it here:

A Special mention goes to the Sydney backing band of young musicians, which included support act Milan Ring on guitar. It’s not an easy task learning the technical aspect of Omar’s music production, yet their skills proved world class.

Thank you to all the supporters on the night! The party kicked on till the wee hours of the morning with respected DJ Simon Caldwell playing funky soulful House music all night long. An incredible night!

Check out the following links; 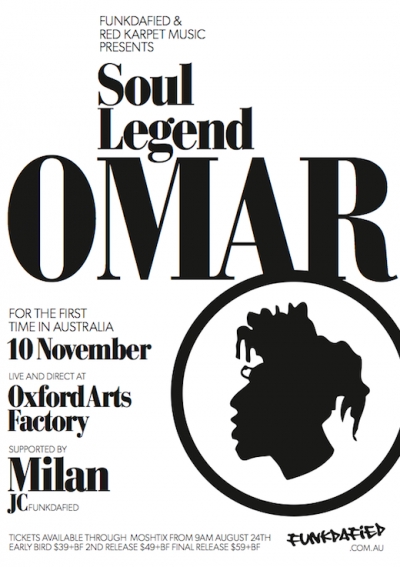