Outstanding hip hop, lyrical frankness & honest portrayals of everyday life, Ben Chijioke, better known as British rapper Ty, signed to Tru Thoughts in January 2013 to begin the next stage in a remarkable career with the release of two singles.

With a reputation built on his original style and refusal to hop on any industry bandwagon, Ty is best known for his lyrical frankness and honest portrayals of everyday life, setting him aside from many mainstream hip hop acts and allowing him complete artistic independence. This has led to the release of four successful albums and a Mercury Prize nomination, among many high profile plaudits.

After gaining notoriety on the London underground scene Ty signed to Big Dada records in 2001, the same year his mighty debut album ‘Awkward’ was released. The union between the artist and label saw a further two albums – 2003’s Mercury-nominated ‘Upwards’ and ‘Closer’ (2006) – released over five years.

Since his fourth solo album, ‘Special Kind of Fool’, was released in 2010 via BBE records, Ty has featured and collaborated with many artists stretching from America to France. Closer to home, Ty features on a tribute to the late Amy Winehouse, released in early 2012, and most recently recorded a track with former Radio 1 DJ and producer Kissy Sell Out.

A lifelong love of hip hop has seen the honest speaking South Londoner gain skills in sound engineering and producing, the latter leading to work with Scratch Perverts, Talib Kweli, Blak Twang and Arrested Development. Ty is also known for his work as a spoken word artist. Earlier this year he was asked to perform and host workshops for the British Council, which culminated in the conclusion of a 35 year halt on international performers in the Sudanese town of Port Sudan. As well as this, his spoken word efforts have seen Ty put in performances at The Big Chill Festival and The Royal Albert Hall. Alongside his work with the British Council Ty is also a member of The HipHop Shakespeare Company, running workshops with young people, showing the influences and works of Shakespeare in today’s music scene.

Just some of the previous praise for Ty:

“Something about Ty’s voice and flow is so deep and hopeful. One of the UK’s greats.” – Zane Lowe (Radio 1) “He makes mainstream American hip hop sound as formulaic and vacuous as it really is” – The Times – 4/5  “As accessible as hip hop gets – a Sunday stroll of an album on which his conversational and precisely enunciated flow rests lightly atop his mellow space funk, nu soul and broken jazz beat productions.” – Independent on Sunday – 4/5 “Mellow, deep and highly accessible, Ty reinstates himself as the UK’s most well-rounded rap don” – DJ Mag

Where: The Basement, Sydney.

$25+BF Tickets through Moshtix. Click here for tickets. More on the door. 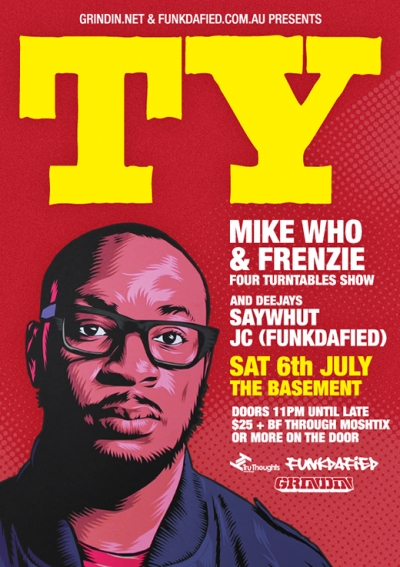