Funkdafied and the Soda Factory were graced by the presence of legendary DJ / Producer WAAJEED from Detroit with DJ Saywhut, Frenzie and JC in support.

According to Waajeed, his first MPC had previously belonged to J Dilla. After the hardware was broken by Questlove, J Dilla said that Waajeed could keep it if he could fix it. His first beats were made on that very same MPC after managing to correct the problem.

Waajeed was then mentored by late Slum Village rapper and producer James Yancey, better known to the world as J Dilla. Inheriting an MPC 2000 from Yancey, he began producing on his own, recording some of his first songs with fellow Detroiters Elzhi and Dwele, and contributing heavily to Slum Village’s Trinity album in wake of Yancey’s departure from the group. In 2001, he established his own imprint, the Bling47 Group, while a quest for Drum Crazy break LP distribution in Detroit led to a recording deal with Ubiquity Records and the formation of the Platinum Pied Pipers (PPP) with Darnell “Saadiq” Bolden.

In 2003, PPP released its debut “Ridin’ High”/“Open Your Eyes” single, and two years later, the full-length Triple P. Triple P, with production contributions from instrumentalists Mystro and Mark de Clive-Lowe, and features from Sa-Ra Creative Partners, Steve Spacek, and hometown MCs Ta’Raach (aka Lacks) and Invincible, earned the duo widespread industry acclaim as well as aided in launching the careers of Georgia Anne Muldrow and Tiombe Lockhart. On Abundance, the 2009 follow-up to Triple P, the talents of up-and-comers Coultrain, Karma Stewart, and Jamila Raegan were on display as Waajeed expanded the group’s sound in reflection of inspiration garnered from countless remix projects, world tours, and collaborations with artists such as Cee-Lo, Estelle, Jazmine Sullivan, Raheem DeVaughn, and Daniel Merriweather.

2010 and beyond finds Waajeed still in lofty collaborative company, musically (Diddy, Mayer Hawthorne), but also broadening expertise in videography and continuing his work on the lecture circuit, including a four-year relationship with the Red Bull Music Academy and an appearance at the 2010 Brooklyn Hip-Hop Festival’s Bodega Education Initiative in support of his mentor and friend, J Dilla. The forthcoming PPP3 album and projects with “Mad” Mike Banks, Karizma, Ana Tijoux, and Invincible are certain to keep the still-emerging producer grounded and on the right path.

A very special night was had by all. 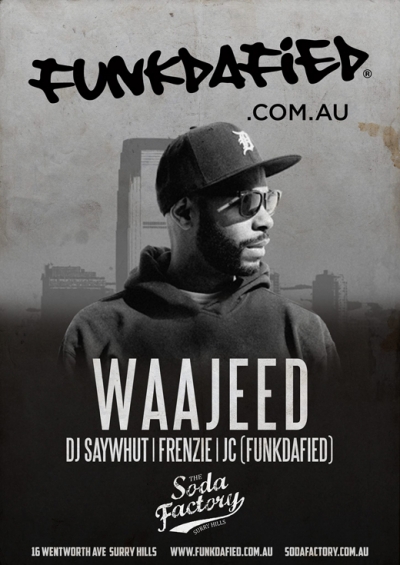