One of the best DJ’s to hit Sydney shores of late – DJ SUSPECT (Paris, France) and a heavyweight line up of local DJs played all 45s on the rooftop at The Local Taphouse.

Funkdafied are proud to announce the launch of a series of events over the coming months entitled ‘The 45 Sessions’. These events will include local and international DJs and collectors playing all 45s.

For the first event we featured acclaimed DJ, Producer, Turntablist and 45 record collector DJ SUSPECT from the Legendary Funk League in Paris. This intimate gig was held on the open roof top of The Local Taphouse. Line up of local DJs who collect 45s and are well known in the local scene including;

DJ SUSPECT; Dj and Producer from Paris, creator of explosive records, Dj Suspect pushes aside the musical borders in his dj sets coloured with Deep Funk, Afrobeat, Tasty Breaks, Hip Hop, Futuristic Jazz, Broken and all kinds of groove.His acute sense of the dancefloor coupled with implacable control of turntables, has allowed him to stand up to the turntables with Afrika Bambaataa, Pete Rock, Cash Money, Marley Marl, Dj Craze, Dj Format, Mr Thing and many others artists of international fame. He has recently finished a tour of the US and Canada where he performed alongside Rich Medina, Just Blaze, Young Einstein and many more and is ready to bring the heat for his upcoming Australian and NZ tour.Half of the duo The Funk League, their LP “Funky As Usual” was released in 2012 after 3 vinyl singles on which have been especially invited Sadat X (Brand Nubian), Large Professor (Main Source), Diamond D (D.I.T.C), and more legendary mc’s.He’s now working on his future LP coming this year with Doc TMK, and Funky Edits with his brother Son Of A Pitch. He has many international guests on tracks on his album including Andy C from Ugly Duckling and Speech Defect from Canada. As well as his own album he is also busy finishing off the second album with the Funk League to be released in late 2013 with many more acclaimed international MCs. We look forward to this intimate set on the open air rooftop for what promises to be an event to remember.We look forward to seeing you all on the Dance Floor!!! 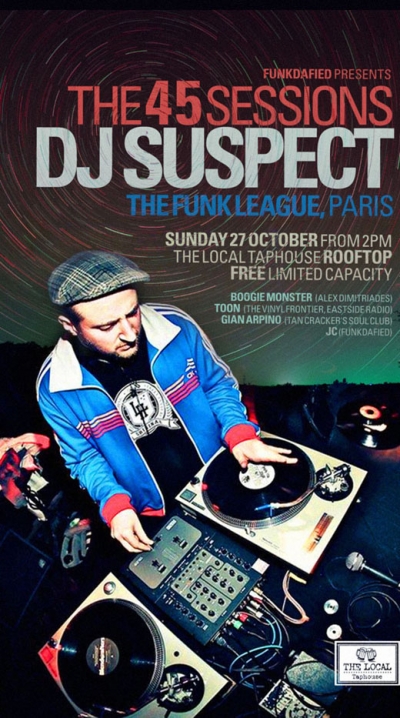