Aaradhna is a 29 year old Soul singer from Auckland, New Zealand. First signed to a record deal at 16 she has previously had 2 other #1 singles in 2004 and 2005 and is a platinum selling R&B/Soul artist in her home country of New Zealand.

Signed directly to Universal Republic Records in the US to a 5 album deal, Aaradhna with her honest and straight to the point songwriting is set to follow in the footsteps of contemporary Soul divas Amy Winehouse, Adele and Duffy with her own Pacific edge.

Recently Aaradhna has spent over 6 months touring America in support of “Treble & Reverb” during 2013, hitting the road with Soul icon Charles Bradley & His Extraordinaires, Blues legend Buddy Guy and Reggae star J Boog completing over 60 shows across the US including two SOLD OUT shows with Common Kings at the legendary House Of Blues in Los Angeles & SOB’s in New York.

With momentum on her side and a well placed US Remix of “Wake Up” featuring Common, she received 5 star reviews from US publications & sites like Entertainment Weekly, iTunes and Essence with her album debuting at # 18 on the US R&B/Soul charts.

Now a winner of the prestigious “Album Of The Year” at the 48th Annual New Zealand Music Awards Aaradhna comes to Australia backed by her live band for her first live performance in Sydney for over a year to launch the deluxe edition of the album which is out in stores now. 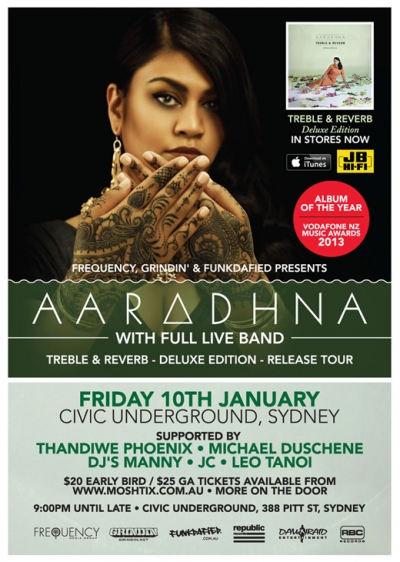