The biggest Soul line up ever put together in Australia:

Just when you thought Soulfest couldn’t get any bigger – Soulfest joined forces with Funkdafied and added the phenomenal DJ beats of 45 Sessions and staged within the “Eat St. precinct”. Over 9 hours of some of the most eclectic Djs in the country spun their rare collectables of 7″ inch Vinyl. Funkdafied were also proud to present the West Coast’s premiere all 7″ vinyl event! the 45 Sessions at Soulfest which brought the best in Soul, Funk, Reggae, Hip Hop and more with some of the best DJs and record collectors of 45s. ‘The 45 Sessions’ was started by DJ Platurn of the Oakland Faders in 2010. Having toured the country and abroad, working with Red Bull, Puma, and many more, the Sessions has proven to be much larger than its 7″ circumference. Little records, big sound — all 45s!

With the addition of Mosé + The FMLY & Mau Power to the Sydney & Melbourne lineup withBexy Uphill. 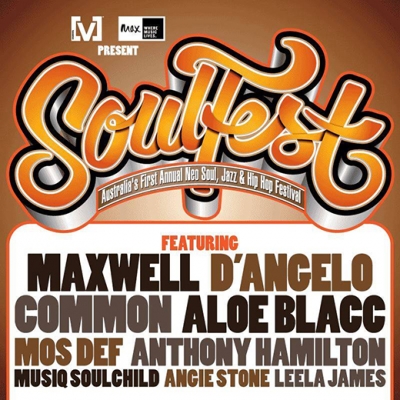