DJ JC (Funkdafied) and DJ Adverse, two of the finest DJs Sydney has to offer, will be in town with the heat to kick off "The 45 sessions” in Canberra.
Expect top draw party vibes…...Soul, Funk, Hip Hop, Reggae and more as they are joined by local heavy weight selectors Degg, Pactman & Jayo.

‘The 45 Sessions’ was started by DJ Platurn in Oakland, California February of 2010. "The West Coast's premiere all 7″ vinyl monthly event!”

JC grew up in London exposed to the sound of mainstream popular music. It wasn’t until 1982 when a friend introduced JC to ‘Planet Rock’ by Afrika Bambaataa that his love affair with Electro Funk, Hip Hop and vinyl began. “I started doing odd jobs and saving money so I could purchase vinyl and started collecting as much Hip Hop records as I could. At the age of 16 I got my first set of turntables, they were a very old set of decks and mixer combined in one large 'coffin' style case - we are talking old school!”

By the time JC hit 18, he was running a mobile disco that lasted three years, playing in local bars, birthday parties and weddings alongside his best friend at the time. After many years playing odd events, and Djing at parties, John moved to Sydney in 1995, learning about the Australian music scene landing himself various DJ parties, eventually playing at the after party for the ‘Take It to The Bridge’ boat party in Sydney 2001. Later in 2001 went to live in Dublin, Ireland for two years, JC hosted a radio show in Dublin for 14 months called the “All Funked Up Show” on Jazz FM 89.8, in addition to DJing at events. His show not only attracted an enormous following, but also sparked his love for radio broadcasting.

JC returned to Australia in 2003 playing out at various venues, scoring a weekly radio show on Bondi FM called ‘The Funkdafied Show’ which he hosted for 7.5 years. In that time, JC secured interviews with elite musicians/DJs including Norman Jay, Micheal Franti, Ohmega Watts and many more. JC currently hosts the Hardway Show on Eastside 89.7 FM every 3rd Saturday. You can get more info at www.eastsidefm.org, this is the premier radio station in Sydney playing Jazz and Soul music.

Over the past 9 years JC has played at every major venue in Sydney and held down several residencies, he has also played at several major festivals including Sydney Festival, Playground Weekender, Surry Hills Festival and more. He also DJs interstate regularly, over the last few years JC has had DJ support slots for artists including Soul II Soul, George Clinton & Parlaiment / Funkadelic, Kashmere Stage Band, Syl Johnson, Norman Jay, Mr Thing, Crazy P and many more. Aside from all the tours and special events, JC lends himself to DJing at corporate functions and private parties, as well as running the Promotion and Events Company Funkdafied that was formed in 2006.

With an exhaustive music collection that now spans Jazz, Blues, Soul, Funk, Afrobeat, Reggae, Hip Hop, Latin, Disco, House, D&B; JC is a DJ who can play many genres but always with the emphasis heavily on Funk, and keeping the dance floor rocking!

One can describe DJ Adverse as a ‘multifaceted creative engineer’ but will humbly refuse any such title. DJ Adverse’ expertise lends itself to video editing, music production, rapper, branding and marketing, in addition to his flawless in demand unique mixing style and charismatic showmanship.

A favourite crowd party rocker and music trendsetter, DJ Adverse (co-founding member of The Groove Dealers) started out in the early 2000’s as one of the original radio hosts at community radio station Triple H 100.1FM. He was swiftly put on the mainstream circuit DJing throughout Sydney after being noticed by DJ Aladdin Royaal, playing at some of Sydney most popular night spots at the time including The Cave, Metropolis, MTV Lair, Shark Hotel, Star Bar and Mona Vale hotel to name a few.

Adverse further expanded his talents and became a leading MC for Booty Bar Australia, which took him touring across the country with Booty Bar founder and Accredited ARIA award winner DJ Lenno. It was around this time that Adverse co-founded The Groove Dealers and helped form and write music for Australian Hip Hop Group Unison and LP and The Architects.

Adverse has played live on Radio for 2RDJ 88.1fm with DJ D on mixbosses, Bondi Beach Radio on the Zulu Nation Radio show with DJ MK-1 and Mirrah and 2SER 107.3fm with Hardcore Classic Radio’s Randy Glazer and Tommy Rock. He played warm up set’s at the 2014 and 2015 DMC NSW championship, The 2015 Wax Wars and sets at festivals including Street Fest with Food Trucks United and at the inaugural SoulFest as part of the 45’s sessions with Funkdafied Events. He has supported the likes of International artists DJ Total Eclipse (The X-Ecutioners), Zac Hendriks, Sarah Love, Eric Lau, Oddisee, Slum Village, Conkarah and Aus Hip Hop rapper Briggs. 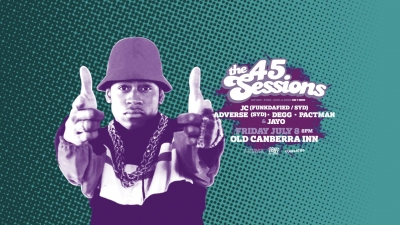