The 45 Session launches in Melbourne

Funkdafied are proud to announce the launch of The 45 Sessions in Melbourne. This event is all about premiering nothing but 7” vinyl records of the booty shaking variety and highlights the true essence of hiphop block party culture.

The 45 Sessions was started in Oaktown, California by DJ Platurn of the Oakland Faders and, since its inception in 2010, has turned into a worldwide phenomenon that nobody saw coming. Proving to be much larger than its 7” circumference, it’s all about little records, big sound – all 45’s, all night! Come see what all the hype is about at our opening party on Saturday August 8th upstairs at 56 Bricks (56 Chapel Street Windsor).

Top selectors on the night will be ITF World Champion and Melbourne hiphop legend DJ J-RED. Supporting the man will be Sydney heavyweight and world-traveling 45’s purveyor Shan Frenzie with the Black Caesar DJ’s Obliveus and DJ Mr Lob rounding out the funky affair. Expect wild style breakdancing vibes, mad visuals and heaps of funk, soul, disco, hiphop and boogie beats. We kick off at 9pm and go to way late, but space is strictly limited so get in early or you ain’t getting in. 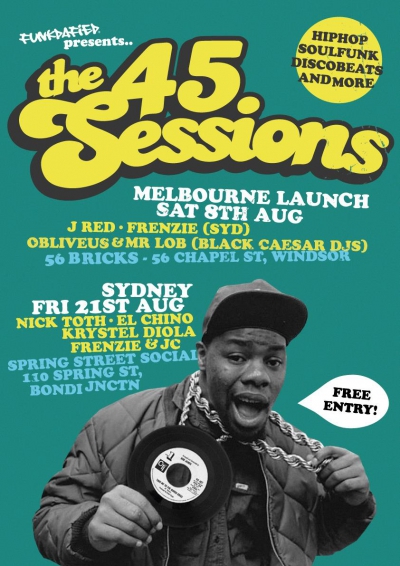