The cactus Channel perform at The Newtown Social Club

The Cactus Channel will be returning to Sydney to do a special gig as part of their Cobaw tour to promote their recent 45 release on 15th August at the Newtown Social Club. Plus joining them in support will be the excellent Sydney based duo Yum Yum and DJ JC, (Funkdafied).

The new 45 from The Cactus Channel, Cobaw, takes its name from a small town in the gold rush end of the Macedon Ranges. Scrubby forests, disused mine shafts and quiet dark lagoons border the grazing land and history hides in all the shadows. Straight out, The Cactus Channel’s heavy, ominous drums and reverb-drenched guitars take this record into soundtrack land. It’s not clear whether it’s a road movie or a horror movie. The B-side, Fool’s Gold, a warning that all is not what it seems, is a slower, thicker tune on the same tip.

Five years in, two LPs and three 45s down, The Cactus Channel are taking control of their own destiny. Self-producing now, self-managing too. The same heavy instrumental hypno-funk that sample cutters dreams are made from. The same hyper-saturated boom, and the same echoing bap. It’s sp00kier now though. It seems darker and goofier at the same time. It’s like Tim & Eric collaborating with Jim Jarmusch at the Muscle Shoals In the year 2500.

Well established now as one of Australia’s premier instrumental acts, the musicians that make up The Cactus Channel are branching out. Sessional players for artists such as Mojo Juju and WILSN, club shows and festival spots all over the country. Engineering and production on everything from future beats to soul throwback records. The move to Wyall Street marks the beginning of a new cactus chapter. Tune in. Headphones up loud with your nan. It’s a vibe, yo. Cobaw b/w Fool’s Gold is available worldwide on Hopestreet Records.

Their origins began in May 2014 when a friend of a friend passed on a USB of Jayo James’ beats to Natalie Slade sealing an instantaneous musical chemistry. Jayo James’ production meticulously reshapes samples into infectious grooves with live instrumentation, couple that with Natalie Slade’s sultry and husky tone adding a distinctive emotive element to their songs uniquely their own.

Naming themselves Yum Yum after a mumbled conversation, they dropped their first EP titled “Slade meets Jayo” within 3 months of meeting. In under a year, Yum Yum have supported hip hop/soul artist Tall Black Guy (US), Bankrupt Billionaires (QLD), a string of Sydney local musicians, esteemed hip hop artist and Triple J Hip Hop Show host Hau, played as part of Vivid 2015, and will now perform at this year’s SOULFEST 2015 (Sydney show only) in October.

DJ JC, (Funkdafied) will also be djing on the night and you can get more info from the links below; 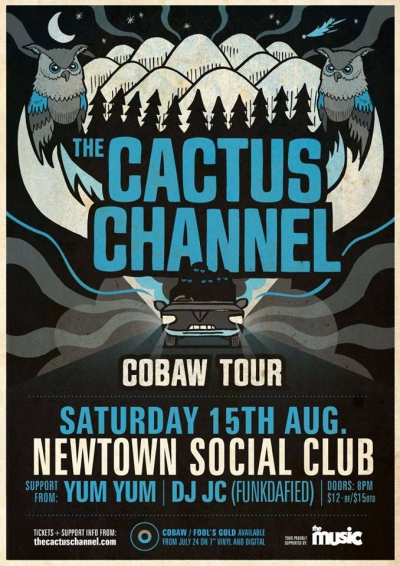