With over 4 years worth of roots flavoured Sundays behind them now, the Back2Back fam have partnered up with Syndey's premiere block party outfit (Funkdafied) to present a monthly reggae, roots, dub and dancehall affair each and every last Sunday at the biggest and best venue north of the river, The Penny Black in Brunswick.

In case you've been napping, resident selector, DJ Obliveus, who knows a thing or two about good times, laid back and jump up vibes for Sunday sessions, enlists the cream of the crop of the rasta set each month to make one helluva party for those that like to get down. Since taking his reigns back, he's brought in legends like Spikey Tee (UK), Mr Lob, Ras Krishna, Rub-A-Dub, T-Rhythm, Sista Sara, Centre & The South and DJ Ayna to help him on his merry way and this month he's super pumped to be bringing in a local band by way of Cape Verde, Africa: The Ras Jahknow Band!

Ras Jahknow blazes new soul and fresh rhythms into what is described best as culturally rich, roots reggae music. Passionate vocals in English and Creole weave through the diverse native sounds from the African island nation of Cape Verde, Brazil, Tanzania and Mauritius to Australia. The band embodies a vision of unity, respect and peace, built on the foundation of irresistible, reggae rhythms.

Cape Verdean born Ras Jahknow formed the band in late 2010, and they have since cemented themselves as one of Melbourne’s most iconic reggae ensembles, showcasing at 2014 Antenna Awards and performing at numerous festivals over the past 7 years:

Ras Jahknow Band released their debut album “Jah Sta Li” in May 2014, followed by a dub remix released later the same year. Both records were produced by acclaimed personality Wayne ‘Lotek’ Bennett at Counter Clockwise Studios. Current releases have enjoyed airplay across national radio such as Triple J and hundreds of Community radio stations both nationally and abroad.

2015 saw the band release a film clip for ‘Jah Sta Li’, embarking on a the Victorian ‘Jah Live’ tour to celebrate the single’s success. In mid 2015, Ras Jahknow was nominated for a Music Victoria Genre Award for ‘Best Global & Reggae Album’.

In 2017, Ras Jahknow humbly accepted the Award for Best Reggae Performer/Band of the year 2015/16 at the Australia Reggae Radio Music Awards.

So get set for the biggest Back2Black yet, as these boys bring the goods. What's best is that its all FREE and as we've brought the party inside over the winter, the tunes will be blazing, the dancefloor will be hot, the fire will be cranking, the pizzas and Sunday roasts will fill ya if the pints dont first.

It all happens on Sunday June 25th from 3pm-9pm with the band playing 2 sets throughout the day mixed with 3 DJ sets of only the finest in roots, dub, reggae and dancehall vibes. 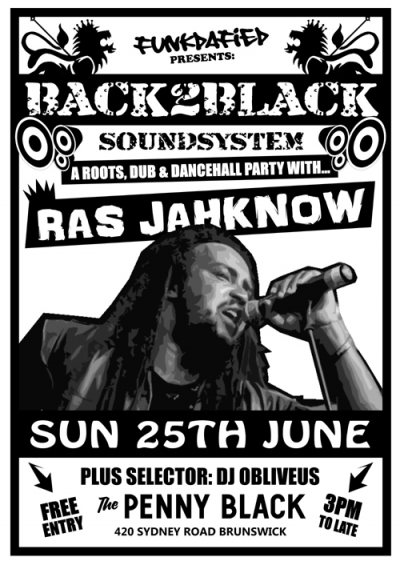