Melbourne’s Cookin on 3 Burners return to the Basement for their first show in Sydney since they sold out the venue last June and this time they are bringing two very special guests with them.Tickets available from Moshtix

Jason Heerah, former members of Electric Empire and an ‘X Factor’ finalist will be supplying his trademark soulful vocals and captivating stage presence.
Also joining them on stage will be esteemed songstress Kylie Auldist who performs with the Bamboos and will release her new album on the Tru Thoughts label later this year.

Having recently played at the Tokyo Jazz Festival and winning the best Soul, Funk, R’nB and Gospel album 2014 @ The Age Music Awards for their Blind Bet Albumn the band are reaching new heights in 2015.
This promises to be a very special show on 6th June with a big line up of local DJs in support playing Soul & Funk including;
Stephen Ferris / Graham Mandroules / JC (Funkdafied)

Formed in 1997, Cookin’ On 3 Burners was always meant to be an experiment in sound. Drenched in the bluesy soulful influence of the late 60s and early 70s output of labels such as Prestige, Bluenote & Groove Merchant, these Melbourne music stalwarts began serving up a feast of tasty funk on a bed of Hammond soul, creating a flavour that gets better with every lick of the spoon.

In 2002 they released their first 7” single (Gravel Rash / Pie Warmer) under the Bamboo Shack label and by the summer of 2009, the band was number 1 on the UK iTunes RnB charts with the track This Girl (featuring Kylie Auldist). In between, Cookin’ On 3 Burners, made their home at esteemed U.K label Freestyle Records, rocked the B-Boy and B-Girl championships, had songs featured on a string of hit TV shows and played alongside acts such as Quantic, Alice Russell, Sharon Jones & the Dap Kings and Fat Freddie’s Drop.

And the heat just keeps on rising.
This is a joint event co-ordinated for Vivid by Funkdafied, Article One Events, DJ Fasmwa and Masterclass.

Tickets are available via Moshtix, The Basement and Vivid Live. 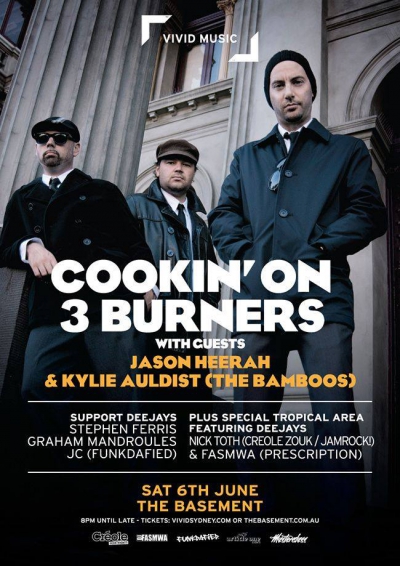