Vibraphonist/vocalist Roy Ayers is among the best-known, most-loved and respected jazz/R&B artists on the music-scene today.

Now in his fourth decade in the music business, Ayers, known as the Godfather of Neo-soul, continues to bridge the gap between generations of music lovers. In the ’60s he was an award-winning jazz vibraphonist, and transformed into a popular R&B bandleader in the ’70s/’80s. Today, the dynamic music man is an iconic figure still in great demand and whose music has been sampled by music industry heavyweights, including Mary J. Blige, Erykah Badu, 50 Cent, A Tribe Called Quest, Tupac, and Ice Cube.

Roy Ayers has continued to write, produce and be featured in collaborations with many major artists. Ayers is currently one of the most sampled artists in the music industry and many of his songs have been frequently sampled and remixed by DJ’s worldwide. To date Roy Ayers has released seven CDs under his own labels, Uno Melodic and AFI CD Records. Always the consummate showman, Roy Ayers has managed to incorporate his jazz virtuosity, with driving funk, melodic rhythms and stirring vocals into an amalgam that almost defies its description as “smooth jazz”. The 2003 recipient of C.O.R.E. (Congress of Racial Equality) Lifetime Achievement Award, Roy Ayers is and shall always be a music icon and a part of popular worldwide culture… Roy Ayers is, without question, a legend in his own time.

A musical assault that crosses over genres, deeply funky and seriously Phat. Their culturally diverse and influential style digs deeper and deeper in the pocket of groove and rock!

Gang of brothers have been born into music. Brothers Andro, Dauno, Fenix and Banel Martinez hail from the prestigious musical Martinez Family (Martinez Akustica). Joining them on drums and lead vocals is brother Buddy Siolo, whose talents have taken him around the globe. Together they are GANG OF BROTHERS. 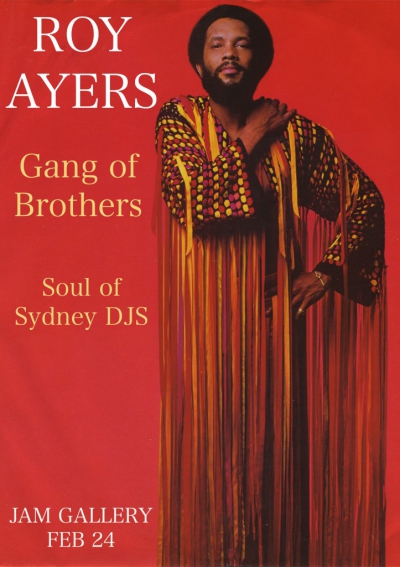