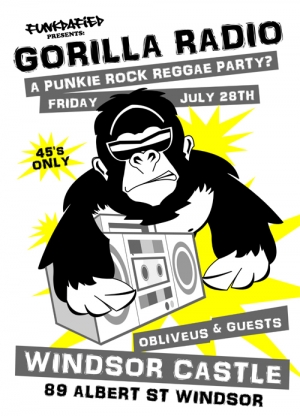 As far as punk rock reggae parties go, this one will be a monthly to remember. Obliveus is playing nothing but abused, used and hard core punk, rock, reggae, ska and metal 45's that nobody in their right minds would put together. Luckily, he's never been one with a "right mind". He's bringing in mates with their own take, too...so come get loose with the Gorilla, bitches! 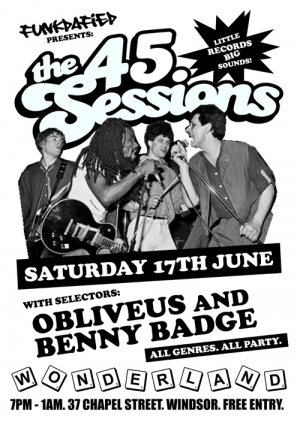 It's another night of those little records and big sounds at our home, Wonderland. Expect all styles of funk, soul, boogie, hiphop and beats from all eras. For this month, resident Obliveus is keeping it simple due to everyone being out of town. He's brought in Benny Badge aka Freekwency aka Silver Linings and the man behind Wax Museum Records in Melbourne's (literal) underground. A bit about Benny: No stranger to a good groove is Australian DJ and producer Benny Badge. Channeling the creative sparkle which launched super producers such as Patrick Adams and Nick Martinelli to stardom in the 1980s, his modern take on this classic sound is both a distinctly fresh and deliciously nostalgic ticket to a time when things were simpler. Based in Melbourne, Benny has spent the past decade churning out studio sessions whilst managing his label Gulf Point Records and the city’s famous Wax Museum Records store. His credits of note include “Love Scenes” by Nite Class, “Seal The Deal” solo release as Freekwency on London’s ISM and the single “Oasis Boulevard” under alias Splendour. Benny most recently produced the Silver Linings debut album “So Good To You” to international acclaim, including a place in The Vinyl Factory‘s top 10 releases for January 2017. Benny spent his early years as a vinyl collector with strong interests in vintage audio and recording techniques. This background would propel his first musical outgoing: Nite Class. With close friends De Konichiwa and Penelope Shum, Benny wrote and produced a prolific collection of songs in the style of his favourite records from the past. Their first and only record “Love Scenes” was instantly regarded as a modern classic in the genre, being likened to groups such as S.O.S Band and The Cool Notes. In 2012 he began Hot Shot Sounds with childhood friend and kindred spirit Inkswel, the label quickly grabbing attention with distribution by infamous Peoples Potential Unlimited. With a mass of opportunity beckoning him, Benny relocated to Manchester in 2013 to mirror his operation in Australia. The outcome was Gulf Point Records, his home-away-from-home and launch pad for new projects, including his current band Silver Linings. As a DJ, Benny’s selections are both a reflection of his musical origins and an expression of their relevance today. With a passion that began in childhood, and a record collection as international as is his experience playing them, Benny’s performances have the rare quality of enabling a full room of listeners to - in the same step - both fall in love and dance like mad. So get yourself down to hear this don of the Melbourne music scene drop 45's that he digs...we know you will too. It all kicks off at 7pm and we go to 1am.
Published in Events
Read more...
Saturday, 24 June 2017 02:27 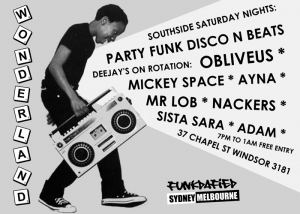 Your southside locale that has been going strong for 3 years. Expect boogie, house, soul hop and funktastic beats from start to stumps and don't be surprised if the windows shake. Our Deejays got it going on.
Published in Events
Read more...
Friday, 23 June 2017 02:01 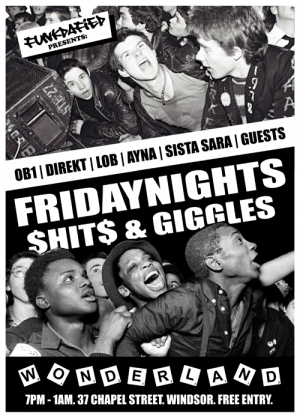 The place to be every Friday night if you find yourself southside of the river. Only the best in random tunes to shake yer bums to. Funk, soul, hiphop, boogie, pop, rock, metal n disco dancing classics and new wave. Get your shits and giggles on and let our deejays sort the sounds...we got this!